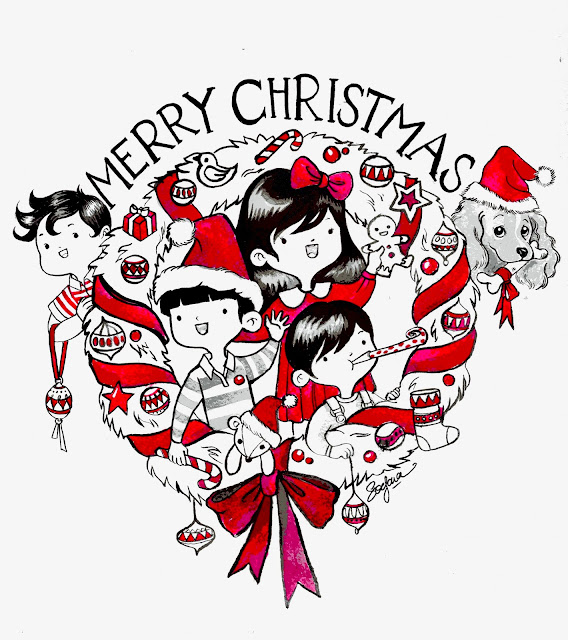 Posted by authordavidseow.blogspot.com at 6:51 PM No comments:

Posted by authordavidseow.blogspot.com at 1:09 PM No comments:

"Olympism aka The Olympic Spirit: The principles of peace, fair play and fair contest with the view to creating a peaceful society with less violence and competition. In other words, Olympism leads to a different, idealized way of life that today’s society desperately needs."

In the days since Joseph Schooling competed in the 100m Butterfly heats at the Olympics, there has been an outpouring of support from The President, Ministers, and the public, and that is fantastic. But I feel compelled to write this blog post because some things I have seen some rather vitriolic things online, written by some terribly ignorant people, who probably don't even understand the definition of the word 'vitriol'. I'm talking about the kind of people whose attitudes have put them in contention for the gold, silver, and bronze medals at the dingbat's Olympics.  Yes, I'm talking about the hoo haha about our Joseph's performance at year's Olympic Games 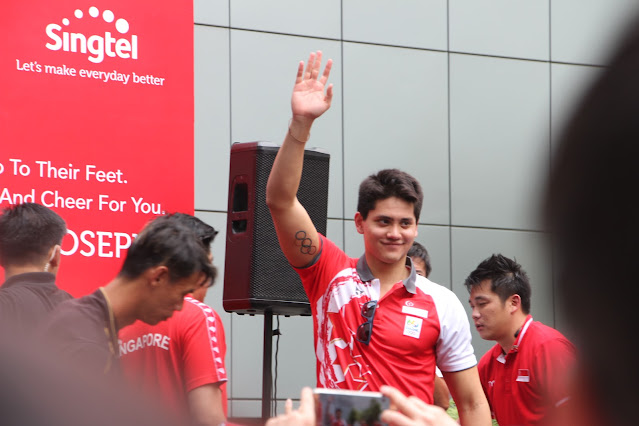 Five years ago, we all watched TV as Joseph took to the starting blocks for the 100m butterfly in Rio. As we all know he was up against the heavyweights of Phelps, Le Clos, and Laszlo Cheh.  Years of hard work, sacrifice, and a great deal of personal financial expense had brought Joseph to that moment. With the whole country was watching, waiting, and anticipating, a lesser person may have crumbled.
He entered the finals as the fastest qualifiers.  I was probably one of the only Singaporeans who did not watch the actual race. My nerves got the better of me. So while Joseph was taking his position on the starting blocks, I was in the shower trying to calm down. By the time I had shampoo in my eyes, Mum screeched like a banshee, "Joseph won! Joseph won, and in world record time!" 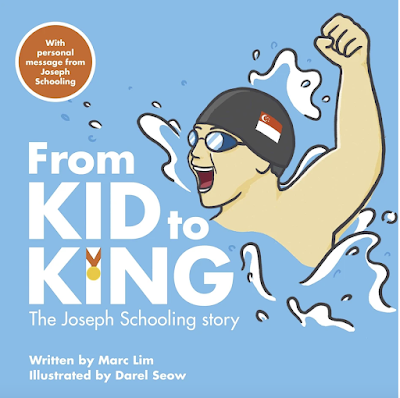 It's needless to say we were all thrilled beyond belief and I finished my shower and watched the race when it was replayed.  My parents have known the Schoolings for years. They are very nice people. The journey to Olympic gold was not an easy one but they never wavered.  I have to say Joseph is the definition of grace under pressure, class, and dignity; qualities that were no doubt instilled in him by his parents, Colin and May. 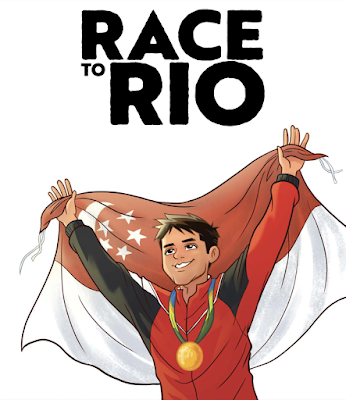 His hero's welcome was much deserved. Hey, I even went to a part of it at Singtel, braving hot and sweaty revelers who had seemingly never heard of deodorant let alone used it. If there was an Olympics for the pongiest fans, there would have been multiple ties for the gold. Deafening cheers heralded Joseph's arrival and as he walked past, I was shoved into a sea of very sticky bodies. I had never needed wet wipes or disinfectant more than at that very moment.

Joseph thanked everyone for their support and after a few more words he boarded his bus and was off to continue his victory lap around the country. His triumph came when I was about to give up my own journey of writing (I'm always on the verge of quitting)  but I was inspired to write a kids' book about this young man. Dad helped me draft an email to Mr. Schooling to ask permission to write it and he kindly agreed. But I was beaten to the finish line by another book From Kid to King. Funnily enough, the illustrator of that book is Daryl Seow (no relation). And so I started work on my first non-fiction picture book. Like Joseph's Olympic journey, the road to publication was fraught with ups and downs, but it was finally published. Race to Rio: Joseph Schooling Goes for Olympic Gold. Two Schooling books by two Seows. There's a joke in there somewhere but I can't think of one right now. 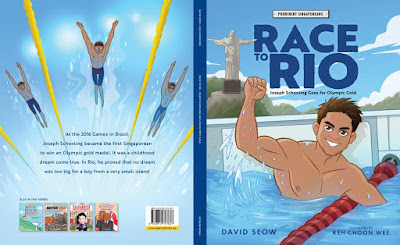 Now five years later, here we are.  There is no medal this time. But he is still an Olympic Champ and nothing will ever change that. I am, however, disappointed in the behavior and the attitude of some of my fellow Singaporeans. There have been gripes from some who supported his win back then but have turned positively vitriolic because they did not get the result they seem to think they were entitled to, that they think they were owed or deserved.

This fair-weather kind of support is extremely unbecoming, and it's even been reported in the international press like SCMP...and Yahoo News UK So embarrassing!

I have to say, a pair of extra small speedos on an elephant is capable of providing more support than these jokers. Thankfully they seem to be in the minority but they're, nevertheless,  very irritating - like an itch you can't quite find. And what's worse they base their opinions on misinformation and assumptions. What did Donald Trump call it? Oh right, fake news. 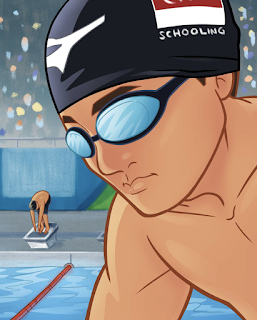 Instead of being bitter, these people should be grateful that we have a true-blue Singaporean Gold medalist. He wasn't imported from another country; he was born here and raised here.  They should be thankful that Olympians like  Quah Zheng Wen, Quah Ting Wen, and Yu MengYu, Joseph have dedicated themselves to their sport, to put this country on the world stage. What have the naysayers done? Wait they've made the news by whinging.

I had a recent debate with someone on Twitter who was moaning about the fact there weren't any medals this time. After a while, I gave up this person does not understand the meaning of sportsmanship.

I don't think South Africa is complaining that Le Clos did not medal this time, are they?  The public is not privy to training schedules or routines so they have no right to disparage or criticize. Doing so does not reflect the Olympic Spirit in the slightest.

The Schoolings don't deserve this treatment at all. And they, like the rest of us, have other cares and concerns that they have to face, so give them a break. 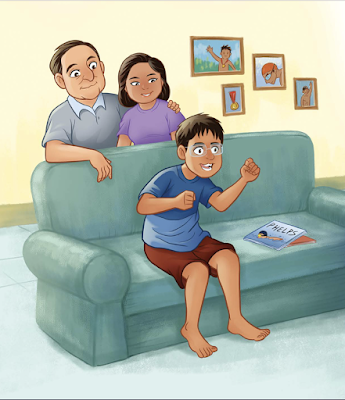 Thank you, Madam President, all the MPs, and anyone else who has spoken against such abhorrent, ungracious behavior.

So instead of being negative nellies, support Joseph,  support Quah Zheng Wen and the rest of our Olympians. Being negative and critical does not help anyone, it hinders us.

So to those who have exhibited such behavior in recent days,  I say focus on what you can do to make things better for yourself and others. I need to remind myself of this too. Oh boy, I really do!

Give Joseph and the rest of our Olympians some much-needed time and space and instead of providing unnecessary criticism, unwanted armchair analysis, or judgment about their performances. Show the world that Singaporeans understand the meaning of sportsmanship and the Olympic Spirit. Be humble in victory and gracious in defeat.

"The tongue has the power of life and death,        and those who love it will eat its fruit."

Posted by authordavidseow.blogspot.com at 9:21 AM No comments: 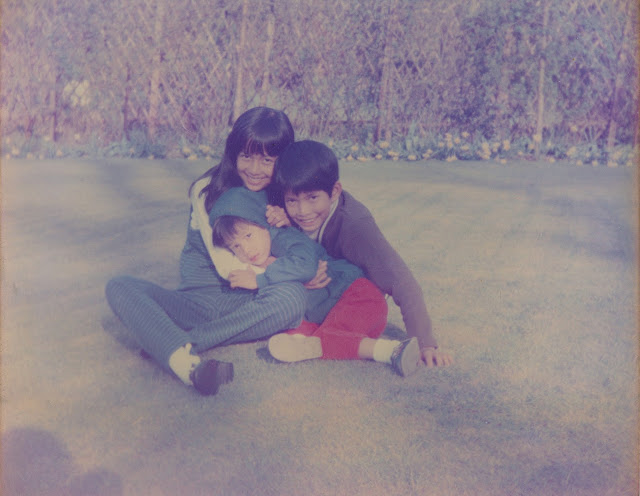 Posted by authordavidseow.blogspot.com at 5:53 AM No comments: 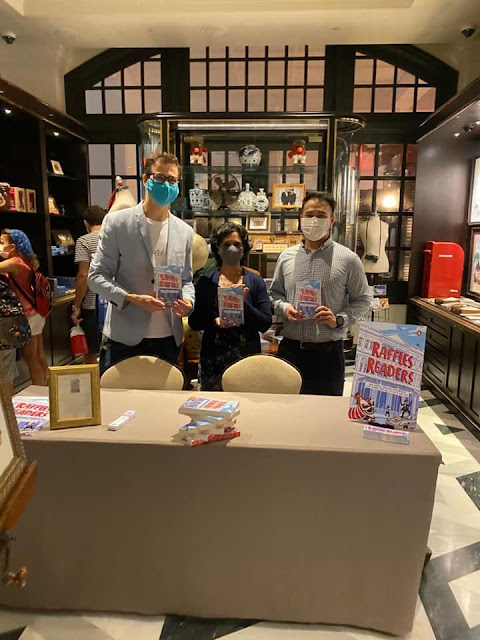 On a rainy Saturday in September, Raffles Readers: A Century of Adventures had its launch at the Boutique at Raffles Hotel. Authors Claire Thamboo and Simon Wray and our illustrator Mark Yong spent well over an hour signing books for friends, family, and hotel patrons.  Emma and Linda were unable to attend as they were at their respective homes in Epsom and Melbourne.

As for me, well, I had a minor sore throat two days before the launch so on my mom's insistence, I paid a visit to my doctor. Once I mentioned I had a slight sore throat, everything went into a lockdown mode. I had to have a COVID test and I had to be quarantined for three days, meaning I was going to have to skip the launch.

However, I was able to check-in via WhatsApp chat. That's me on the iPad on the table! 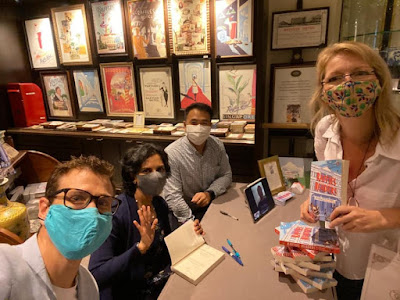 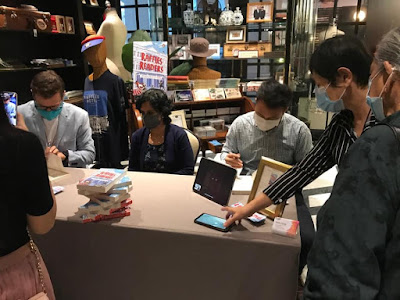 All in all, there was a pretty good turnout despite the bad weather. Special thanks to our wonderful publisher, Nora from Penguin Random House SEA and Nicola Ransome Goh for organizing the event and to Raffles Hotel for hosting us.

Posted by authordavidseow.blogspot.com at 12:20 AM No comments:

Posted by authordavidseow.blogspot.com at 5:12 AM No comments:

Raffles Readers: A Century of Adventures 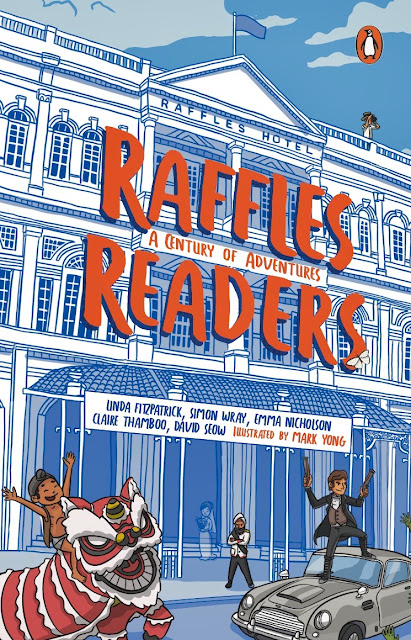 Ten years ago, I had an idea of doing a series of children's books about the famous Raffles Hotel that spanned a century. As most writers know, writing is a very solitary process and I wanted to get a group of writers together to develop this concept with me, but I did not know if I could find any writers who could come on board the project.

Around four years later, I had the opportunity to meet aspiring authors when I was a member of the Singapore chapter of the Society of Children's Writers and Illustrators (SCBWI) which, at the time, was headed by the lovely, talented and very funny Catherine Carvell, so I knew most of the members  were aspiring authors who were keen to have their work published.

So I broached the the subject with Emma Nicholson and Linda Fitzpatrick, during a meeting at, where else,  Raffles Hotel and we agreed we should proceed. Simon Wray and Claire Thamboo came onboard shortly after that.


Emma and I had just signed with an agent who thought the idea was brilliant. She then pitched the proposal to a potential 'backer' and before we knew it we were in a boardroom, meeting with high-powered executives, discussing the various possibilities of marketing the book both locally and internationally. We hadn't even started writing the stories yet! A verbal agreement was reached by the end of  that meeting that we would commence work on the books and things would progress from there. 'That was fast and easy,' I said to myself. In hindsight, it really was too fast and easy. And way, way too good to be true.

We set each of our stories in a different time period, spanning the 1920s to the 2000s  and completed them by the set deadline.  But then, for the following 18 months, we were repeatedly stonewalled.  Our agent repeatedly assured us the project was on track. So when it feel apart, we were understandably disappointed, frustrated and very, very angry.


We parted with our agent, put the stories aside, and focused on other projects. Then last year, after some encouragement from a friend, I decided to submit the manuscripts to Penguin Random House SEA for consideration. I didn't expect  anything to come of it. But after a few months, I received a reply offering us a publishing contract. There was one caveat. The stories would be published but as an anthology instead of a series of books.


We were thrilled! After six long years, we were finally going to be published. I asked the talented Mark Yong to come on board as our illustrator and now our book is scheduled to be released next month. Thank you, God, leading us on this roller-coaster of a journey which finally led us to Penguin, the best publisher for the project. We hope you like our book and its tales of 'monsters' missing silver, spies, 'ghosts' and Stamford Raffles.

Posted by authordavidseow.blogspot.com at 5:09 AM No comments: